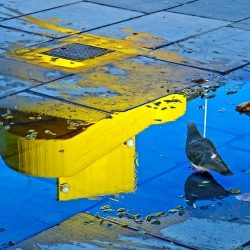 I think we all know the story behind Coldplay’s Yellow but, just in case you don’t, it seems that frontman Chris Martin was absent-mindedly looking out of his window one afternoon when he saw something – the sun, a daffodil, Gwyneth Paltrow, nobody’s entirely sure – which made him stop and say to himself: “That’s yellow, that is.”

And the effect this thing – whatever it was – had on the sensitive singer’s psyche was so profound that, some hours later, when drummer Will Champion came in from the garden and asked his bandmate why he was staring out the window, all the latter could do was shake his head and repeat, over and over again, these four words: “It was all yellow.”

And Will Champion, being a drummer, said: “You should write that down, Chris, it’s really profound. Maybe we could turn it into a song.”

And Chris Martin, being the singer with Coldplay, agreed.

And then they had their tea. And after tea they sat down to write the song, but instead wrote one about getting caught in the middle of a spider’s web and being really scared, because the spider was climbing up the spout to get them – but then the rain came down and washed the spider out and everything was OK again.

I’m sure you know the one I mean.

Anyway, this all came back to me when these photos arrived from Smoke reader Martin Deutsch. Because, although the mind of the average pigeon is a much more complex organism than the mind of the average member of Coldplay*, who is no more capable of walking whilst jerking his head back and forth than he is of rubbing his stomach whilst scratching his head – which is, incidentally, what Gwyneth Paltrow does when she’s hungry – they do have one thing in common, namely this: both are easily confused by reflections. This pigeon, for example, is clearly totally bewildered by the mysterious yellow building beneath the water and, in the end, having sized it up from all directions, has decided to wade in and have a closer look and –

Well, I’m sure we all knew how that was going to end. Also, of course, the building is all yellow, so that’s another Coldplay link.

by Mark Sadler
I grew up in a dockers’ terrace on Sea Alley, in East London. Our house was one from the end of the row, near to where the street split into three tributaries, like an old piece of frayed rope. A stone staircase ran along the front of the houses. When the water was at its highest point, it would come up over the third step, leaving the fourth step clear for you to walk on. [read more...]

by Matt Haynes
They smile for photos;
Their shoulder-mounted rifles
Brush the toddler’s hair. [read more...]

by Matt Haynes
Those of you who were part of the New York leather scene at the tail end of the ’70s will know that, in the bars around Christopher Street, there were really only ever two topics of conversation: were the Village People helping to perpetuate offensive gay stereotypes; and should you, if called upon to pilot a small boat through uncertain waters, strip off completely, or leave your cap on? [read more...]