Were I to sidle up to you in, say, the Lamb & Flag, tap you on the shoulder, raise my glass and opine, with an unsubtle wink, Ten Large Swedish Boys Wearing Waist-Length Velvet Coats And Bibs Will Provide Hot Clandestine Kisses To Remember, then you’d doubtless smile knowingly, chink your glass to mine, and reply sir, that is indeed a most ingenious mnemonic for remembering the order of the Thames road bridges from Tower through to Richmond, now please be so good as to look after this small urn containing the ashes of my late mother as you are clearly a man of integrity who can be trusted with her mortal residue whilst I nip to the gents.

Or words to that effect. And yet, if I’d vouchsafed, in the very same bonhomous manner, My Heron Feels Bolshy, then you’d probably have eyeballed me rather more circumspectly – as if to say you, sir, are gibbering fool – before hastily emptying the contents of the urn into your IPA, downing it in one, and dive-rolling over the bar. All this despite the fact that what I was proffering was an equally useful aide-memoire for those bridges not accessible to vehic… vehicul… vehic… I’m terribly sorry, I have the hiccups… cars.

Now, if you’re Jeffrey Archer, Steven Norris, or one of those appalling people who lives in Kensington & Chelsea (I hope you’re none of these things, by the way) and thinks the Congestion Charge is an outrageous infringement of personal freedom, in particular the personal freedom to impose your freedom on everyone else’s, then you’re probably scratching your head at this point and thinking what? What’s the point of a bridge that one can’t use to inflict one’s socially-cleansed offspring on a neighbouring borough at least once a day via the medium of a Toyota Landcruiser with bull bars, whilst simultaneously bringing much of London to fuming incoherent red-faced gridlock? But I’m afraid it’s true: these bridges really are for people armed only with feet. And today my heron does indeed feel bolshy, as you’ve probably noticed, so let’s delve further.

M for Millennium probably needn’t detain us long, though, as it’s hardly a secret. If you feel no journey from St Paul’s to Tate Modern is complete unless a fat man from Minnesota has walked slowly backwards into you whilst attempting to capture on video the precise moment that a former power station on the South Bank spontaneously collapses and reassembles itself twenty yards to the left, thereby breaking all known laws of physics and bricklaying – because why otherwise would anyone want to video a stationary object? – then the Millennium Bridge is the gently thrumming plank of light for you.

H for Hungerford is more problematic, as it involves playing fast and loose with history. Because what I’m thinking of is the decrepit old Hungerford footbridge I grew up with, that rusty afterthought bolted onto the sturdy seaward girders of the defiantly prosaic structure that still carries the tracks out of Charing Cross. You see – I loved that bridge. True, it could be a bugger in the rush hour, when commuters would come at you in a rolling pin-striped maul. And it could be pretty hairy in off-peak, too, when those lacking friends would occasionally be tossed waterwards from the dingier spots between its barely functioning lamps. But, yes, I loved it: loved the way it shook and trembled as the wheels of Kent-bound trains screeched and squealed just an arm’s length away; loved the way the mottled steel of the churning river flashed through the empty bolt holes between my feet; loved its raw, unfancied unfanciness. It was a bridge. It bridged. End of story. But if others wanted to impose their own stories, it was fine with that too. Mid-river trysts, moonlit views of St Bride’s delicately candled spire shared with still-secret lovers as the last train to Maidstone rumbled slowly past, or hungover sunrises, smoking a single Benson with someone whose name is already forgotten after falling asleep in Embankment Gardens, while a police boat scours the water for less fortunate drunks below – all of this, Hungerford Bridge heard and saw without comment.

But then, at the end of the last century, it was hauled down, unbolted until it fell crashing to the river bed (or so I like to imagine – in reality, it was probably sold to a scrap-metal man from the Cally, or to a gullible cowboy from Arkansas who’s apparently collecting these things), and in its place was strung a double-vision of loveliness, two pearly concoctions of granite and cats-cradled cables, one either side of the tracks, named the Golden Jubilee Bridges. Which, as I say, is a bit of a problem, as there’s no way I’m going to write about something called a Golden Jubilee Bridge, not in a magazine that’s secretly dedicated to using art and literature as a front for overthrowing the monarchy and replacing it with a democratically elected head of state, hopefully me. (Note to self: remember to check current Smoke policy on this with Jude, also estimated timescale.) Bear in mind, here, that I’m still refusing to catch a train to Bermondsey until the Jubilee Line goes back to being called the Fleet Line – I know it ended up not going anywhere near Fleet Street, but then it didn’t open in Jubilee Year either, so nah.

That leaves us with just the F and the B and sometimes, when I’m being deliberately provocative, as I am now (and you wouldn’t believe how hard it is to type in lace gloves), I cite these as my favourite Thames crossings. Other times, I think maybe they’re my favourites anyway, and I’m making life unnecessarily difficult by wearing the gloves. The B, of course, is for Barnes, and the F… well, that’s for Fulham.

Yes, Fulham. NOT Putney – Putney Bridge is the road bridge alongside. And if you didn’t know it was there, clinging to the side of the District Line just south of Putney Bridge station, you’d never find it – the northern access, after all, involves a double-back under the tracks and climbing a flight of steps beside what might be a breaker’s yard. Once you’re up, though, the path is broad, the sky soars overhead, the trains skitter along beside you like Wimbledon is the only place to be, and… it’s glorious.

One of the Thames’s more discombobulating quirks is that it’s much wider upstream than down, where it’s been artificially banked and trammelled – no one paddles on the beach outside Lambeth Palace any more, not since Mr Bazalgette’s embankments went up in the 1860s and the Archbishop lost his deckchair concession. Out here, though, the river’s still allowed to undo its buttons twice a day and slob out across the mud with primordial glee. Out here, boats get beached; birds that aren’t pigeons stand on one leg; chewed wooden stumps that might be the remains of Saxon jetties, or might just have floated down from Kew after the storms, poke from the mud like the wasted spears of poorly-coordinated Putney-hating giants. Out here, Time slows down; peace and equanimity return. Out here, a child from Parsons Green tossed over the railing in a too-big blazer would probably get a good five minutes to consider the long-term social implications of parental choice before eventually sinking into the gluey silt; that’s five whole minutes for you to get in a few practice shots with tennis balls before measuring your throw and hitting it with its abandoned violin.

Even further upstream, at Barnes, everything feels like Norfolk. But in a good way. Crouch on the Chiswick shore at low tide, look out across the tree-hemmed shingle beach, and you’ll see the river flooding down under the bridge from Mortlake brewery, bringing with it nothing but a thick yeasty silence. There’s not even road access this side – just a path through the trees to God-knows-where. A bus, pottering along from Hammersmith, daubs a bright red watercolour smudge along the opposite bank. Can this, you’ll say to yourself disbelievingly, wiping the first spit of rain from your camera lens, really be Zone 3?

A bird that isn’t a pigeon stands on one leg, and eyes you combatively. Rain thrums on the water, getting harder now. Drowning out the sound of gaudy Swedes puckering. 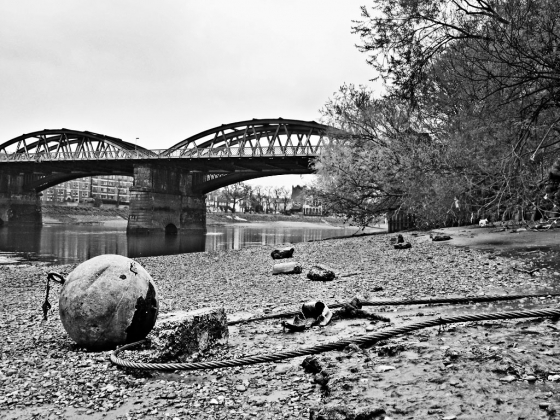 [This piece originally appeared in Smoke 6, when we all knew who Steven Norris was.]

A Dirty Wink From Chairman Mao

by Dale Lately
A “hip, funky, upbeat kind of stay” is how one online guide describes this distinctive London accommodation, and the shiny-eyed receptionist – barely out of her teens – gives you a hip, funky, upbeat kind of swipe card when you hand over a grubby twenty. Cell 14, she tells you. Sorry? She smiles. That’s what we call them. It’s part of the theme. [read more...]

Due to earlier passenger action, the Bakerloo Line has been suspended from the Victoria Line at Oxford Circus, and is now swinging gently from side to side. [read more...]