About » the contributors » MNO » Nydia Hetherington 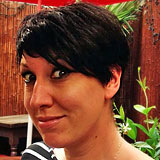 Originally from Leeds, Nydia Hetherington lived in Paris for ten years where she created theatre and became a clown. Since moving back to London four years ago, her work for stage has been performed at festivals and she has done readings from her own fiction at HUB-BUB (The Writers Hub, London) and Birkbeck Scribblers (University of London), while her short story Angel Eggs was highly commended at the Bristol Short Story Prize 2012. She is currently not writing a novel about the circus and is in her third year of a BA in Creative Writing at Birkbeck, London.