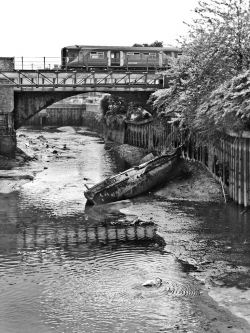 A train leaves Waterloo bound for Windsor on a windless overcast morning.

A group of Japanese schoolchildren, accompanied by their teacher, boards the train at Clapham Junction. They are to spend the day visiting Windsor Castle. The children sit in pairs in the front carriage of the train. Their teacher explains the political basis of a Constitutional Monarchy.

Milo Langston passes through the entrance at Ashford station. He is twenty-three. Coincidentally, he has been wearing the same T-shirt since his birthday twenty-three days ago. It was once blue and still bears the logo of a company in the United States that manufactures carbonated energy drinks.

A pair of swans begin their paddling struggle into ascent on the Thames near Hampton.

The train passes through Mortlake station where it is not scheduled to stop.

A signalman at Feltham panel smokes a cigarette, dropping the ash over page three of the Sun. He is not thinking about the level crossing at North Sheen.

The swans are airborne over Hampton Court. They circle the Diana Fountain in Bushy Park but do not land.

The train slows to a walk as it approaches a red signal at the end of North Sheen platform. Driver Bill Renwick curses the Feltham signal panel in a West Country accent as he comes to a halt at signal Foxtrot 6-7.

Absently touching the hollow indent between the bones of his left wrist where no watch resides, Milo Langston watches orange words scroll silently across the train indicator at Ashford station. A Reading train has been cancelled. Milo shuffles his feet and waits for further departures to be illuminated. The next train scheduled to arrive is a Windsor service in approximately twelve minutes. Milo leaves the platform at Ashford, turning left out of the station.

The signalman at Feltham panel stubs out his cigarette and, without looking, pushes a button which clicks as it locks into place.

The barriers close at North Sheen level crossing. The signal at the end of North Sheen platform clears to green. In the cab Bill Renwick pulls a red plunger and shifts the power control forward.

The children in the first carriage of the Windsor service listen as their teacher recites alphabetically sixteen Commonwealth Realms and fifty-three Commonwealth Nations.

Milo returns to the platform at Ashford holding a white carrier bag. He sits down on the edge of a metal bench. He checks the train indicator again. The next train is delayed by four minutes.

The train to Windsor climbs the curve onto the railway bridge at Richmond. A swan is preening in the four foot. Another is standing on one foot on the iron railing. Although Bill has seen swans on the line before, he always finds the whiteness of their feathers startling. They are bigger than he thinks is reasonable for a bird. He draws the power brake smoothly back, bringing the train to a stand before the swans. He knows it is illegal to touch swans. They belong to the Queen. If they continue to block the line, Bill will request a power cut and assistance from the Royal Warden of Swans office.

At Ashford, Milo opens a can of beer and drinks half of it in one tilt. It isn’t cold and makes him feel slightly sick but he doesn’t care.

Bill sounds the horn at the swans and inches the train forward along the bridge.

Milo stands up and walks to the edge of the platform crossing a thickly painted yellow line. The knobbly paving slabs massage his feet through rubber soles. He stands with his toes projecting over the bricked border of pure space.

A man in coveralls pushes a wheelbarrow down the Ashford platform retrieving bits of litter with a long-handled picker. Milo steps back from the edge as the wheelbarrow approaches.

Two swans simultaneously launch themselves off the railings of Richmond railway bridge. Bill pauses to watch their graceful descent over the Thames before taking power again.

Milo consults the train indicator again. It now says the next train is sixteen minutes late. He opens another can of beer. The man with the wheelbarrow has returned to the far end of the platform. Milo can no longer see his dark outline along the length of the platform.

Milo walks to the London end of Ashford platform.

Bill passes the Youth Offender Detention Centre outside Feltham on a long straightaway. Linespeed is seventy.

Milo leans forward, peering up the line. His view is obscured by thick foliage and a curve in the track.

According to habit, Bill engages the brake as he enters the blind curve before Ashford station.

It begins to rain. Big drops splat onto the railheads and splatter on the ballast.

Bill flicks on the windscreen wipers which smear damp bird poo in an arc across the glass. He turns a dial which causes fluid to squirt onto the screen and the wiper speed to increase. Gradually, the chalky film clears.

Milo inches his way to the very end of the platform toward the ramp. The rails ping in anticipation of Bill’s arrival in Ashford. Milo regards his toes poking through the canvas of his trainers.

A trickle of water runs through Milo’s hair, tickling his scalp and running behind his ear. Rain soaks the back of his T-shirt. He feels his body heat rising through the dirty cotton and notices the ripeness of his own smell.

Bill pulls the brake handle into the Full Service position.

Milo drops the carrier bag onto the platform.

Bill sounds a long, two-tone blast on the horn.

Milo hops down onto the line. The horn seems to mix with a song in his head, a thrumming wordless harmonic from his mother’s village in Eritrea before his uncle brought him to England. He remembers squatting on the earth under a tree, his hands splayed over the white baked ground. The song now fills his head.

Bill grips the brake handle and, after a pause, shoves it into Emergency.

Milo squats down and opens both hands over the ballast.

Milo rolls his left shoulder forward and turns away from Bill’s rushing advance.

Bill and Milo meet for the first time through the medium of metal, fibreglass and perspex. Milo Langston, also known as Yasamee Adir, is the seventh individual Bill has met under such circumstances. This figure is somewhat above average, causing Bill’s colleagues at Waterloo to speculate on Bill’s statistics.

Bill and Milo’s brief relationship comes to an abrupt conclusion. Milo rests less than two metres into the platform at Ashford. Bill sits motionless above him.

Bill turns off the windscreen wipers.

The signalman at Feltham panel opens communication with Bill’s radio. “Hello, Drive. This is Feltham Area seven eight. Please state your position and the nature of your emergency.”

Bill responds to Feltham panel, “Hello, mate. Two uniform one nine. I’ve got one under at Ashford.”

The group of Japanese schoolchildren board a local bus. They have been instructed by their teacher not to take any pictures until they reach Windsor Castle.

Bill Renwick departs Ashford in a taxi reflecting on how he will spend the next three weeks of holiday assigned automatically following an incident of Traumatic Stress.

The indicator on Ashford platform flashes an update: Terminated at Ashford.

[This piece originally appeared in Smoke 11.]

Not as good as Mr Tumble

The small boy in the red-white-and-blue hat looks up at the skies, looks back at his father, looks out to the river. “Is she the lady off of CBeebies?” he asks, gummily. The gold boat glides past Blackfriars. “She’s not as good as Mr Tumble, Daddy.” [see more...]

The Walthamstow Tripod
What is it? What's it for? Who put it there? Do you think the thing on the top might start flashing after dark? [read more...]

“I will always love you,” he bellows as he wheels his cleaning cart down Gresham Street, trousers too short, grey hair almost gone, iPod clearly turned up to the max.