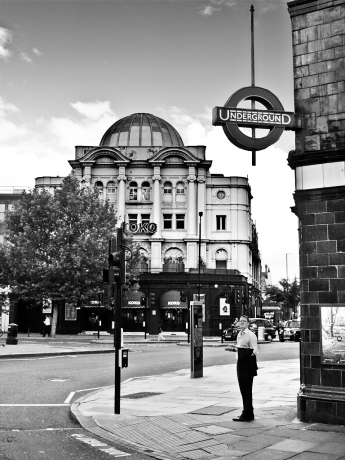 The queue is round the block which means they might be IDing tonight. I have a dodgy fake but Erica doesn’t. If we get checked, our plans’ll be scuppered, and I literally cannot wait until this band tour again. It has to be tonight.

The crowd are older, at least seventeen, and smoke cigarettes and drink vodka from glass bottles the size of hip flasks that they wedge into the back pockets of their baggies.

“They’re not on till midnight,” Erica says. “Let’s just go for a walk down the high street and come back at twelve. Maybe by then they’ll be less fussed about who they let in anyway.”

It’s a cold night, and a wind that smells of spilt urine ruffles our hair. Goosebumps bristle my arms.

We amble along the high street, chilly in our baggy jeans and fishnet tops. A Big Issue seller peddles his last copy, a woman with no teeth asks for spare change, a guy with scabs down the back of his neck wants a quid to help him get to hospital; he shows the scaly flakes to us as proof of his plight. We keep our eyes low and link arms, brace against the cold.

A familiar face emerges from the rabble.

“What are you two doing? Camden Palace is back that way.”

Luke is lost in a cloud of Lynx. He was in the year above us at school but, since finishing, he’s snagged a job that’s something to do with music. He always wears a thick key chain on his belt that loops to his knees and has headphones jammed in his ears.

“But it’s Feet First tonight – go and have a dance.”

We don’t want to admit that we’ve never been to a club before, apart from under-eighteen garage nights at Bagley’s and that one time at The Dome in Tufnell Park. We’d spent the entire night hidden under the cigarette machine, heavy metal rushing over us like waves.

“Not gonna hang out on the street, am I?” he says, and we have no choice but to double-back on ourselves.

The line has thinned to a more manageable size, just level with the Purple Turtle across the street. Luke lights a cigarette and offers the pack. We shake our heads, so he blows grey smoke away from our faces, bunching his mouth to exhale over his shoulder, just like my mum.

The doorman ushers us through, no questions asked. I dig around in my pockets and produce a pair of flyers advertising £2 off admission. We slide three pound coins each across the counter and are handed pink paper raffle tickets that are taken almost immediately by a bomber jacketed bouncer on the stairs. He points upwards and we climb, bubbles of excitement bursting in our chests. At the top we find a long corridor thick with dry ice and the pounding thrum of the first few bars of Smack My Bitch Up.

Half-running, we hit the dance floor and join the thicket of swaying clubbers; someone’s cigarette catches my fishnet and burns a hole right through the sleeve. Luke passes me a bottle of orange Bacardi Breezer and I take a swig, twirling on the spot, boogieing my hips, waiting for that first drop. There it is, it’s here, it happens: the music kicks in and everyone starts to bounce and punch and pogo and flail. Drinks spill and ash scatters and the floor beneath our feet turns into a gutter.

Luke rubs his arms and scowls. “Your fishnet feels like a cheese grater!”

The song reaches its climax, the ethereal wail that slows everything down to a hot and heavy pulse; and then, as it all kicks off again, the silver flash of strobe cracks through the darkness. Erica dances with her eyes closed, a smile spread across her face, long hair whipping her neighbours as she moves.

The ceiling stretches high above us. Girls with glow sticks dance in the little box balconies, couples move like shadows behind them. On the stage, a goth of indeterminate gender uncoils ropes of wire, plugs things together, taps microphones. The dance floor pulses with Every You Every Me and we sing along and mime the words to each other until licks of sweat drip from our temples.

We look all wrong in our pastel vest tops and baggy jeans. The best dressed are the goths, in their swathes of leather and crushed velvet and PVC, faces caked with white powder, fingernails beetle-black. In the bathroom, I jab more kohl around my eyes, panda my sockets with black glittery powder. The sinks are filled with crumpled plastic cups, sodden tissues, vomit, cigarette stubs, ash. A girl with pink nostrils and armfuls of rubber shag bands asks if she can borrow my eyeliner. I hand it to her and watch her transform her small bloodshot eyes into artwork, thickly lined like Cleopatra.

Erica has bought us something-and-cokes which we sip as we survey the scene. We spot a few trendies from school, and the punk kids are here in their ties and safety-pinned shirts. The bubble-headed girls in low-cut tops and self-consciously casual jeans wrestle with boys from the year above. I won’t be caught out like this again, I vow. I will buy a crushed velvet minidress and matching black lipstick, and I will only drink drinks that are red like blood. Snakebite and black and watermelon Breezers and vodka cranberry.

It’s nearly midnight. We thread our way across the dance floor to the stage. No one else seems to care that the band are up there already, adjusting strings and pedalling the bass drum, the dull thunk barely breaking through the pounding PA.

The White Stripes are silenced and the band kick in. Shadows seem to solidify around us as packs of goths materialise from the darkest corners. Their black Stargazer lips mouth the words, and the sweet smell of clove smoke wafts over us as we jump and twirl our hands to the synth and dance through every second of the thirty-minute set.

At twelve thirty, with the last dying bars of the last song still reverberating through the old theatre, the goths melt back into the darkness and the floor refills with pop-punk ravers who twirl glow sticks and soft-mosh to Dreaming of You. Luke is behind us, prodding our shoulders.

I haul myself onto the stage. As I pick through the spaghetti tangle of wires, Erica follows Luke towards a door at the back. We creep down a dark corridor and Luke raps smartly on a dressing-room door. The band are sprawled on chairs, smoking cigarettes and drinking from bottles of beer. Their stubbled faces are a mess of make-up and slick with sweat, eyeliner smudged to their cheekbones. The room smells stale.

On the table, I spot an apricot-coloured plectrum, the Fender print faded from a sweaty thumb. I want that plectrum more than anything; more than a crushed velvet minidress, more than my eighteenth birthday.

Luke introduces us and, too shell-shocked to do much more than squeak “great set!”, we start to back away from their effortlessly cool post-show comedown. Then, for a moment, everyone cocks their heads to the opposite side of the room, to listen to someone say something boring about wires. I snatch the plectrum like a striking viper. And then it’s over, we dash back into Feet First, back into the throng of clubbers, back to the dance floor, back to the beginning of a whole new life that I know will last forever.

... because maybe the sight of Mo Farah breaking free to win the 10,000 metres as if he'd just looked up and seen the last through train to Lewisham pulling into Pudding Mill Lane (and had temporarily forgotten that Pudding Mill Lane was closed for the duration of the Games in case people tried to use it) struck a chord and, if it did, we'd love to know. [read more...]

… it's all been downhill since they stopped wearing capes, you know…
[see more...]

A Dirty Wink From Chairman Mao

by Dale Lately
A “hip, funky, upbeat kind of stay” is how one online guide describes this distinctive London accommodation, and the shiny-eyed receptionist – barely out of her teens – gives you a hip, funky, upbeat kind of swipe card when you hand over a grubby twenty. Cell 14, she tells you. Sorry? She smiles. That’s what we call them. It’s part of the theme. [read more...]