… and I understand we can now go over to our reporter, Rishi Dastidar, who is, I think, somewhere in South London. Is that right, Rishi? 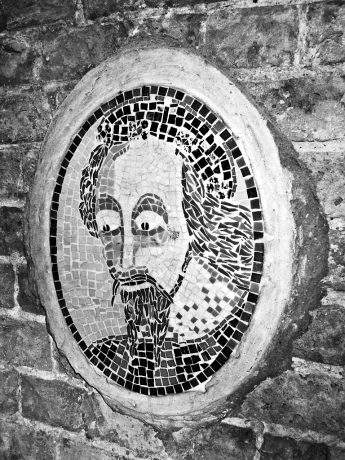 Rishi: Thanks Gary. And, yes, you join us here in Lambeth, where I’m privileged to be chatting exclusively to Edward, the Black Prince, back from his military campaigns on the Continent. And, indeed, the dead. So, first, Ed – if I may call you that? – thanks for taking the time to join us this morning. Can I start by asking you why, after 800 years, you’re back in this part of town? Is there a party on?

Edward: Yes, hi, thanks, Rishi, thanks for having me. And hello to all of you peasants…

Edward: … listeners out there. Now, as to what I think was the specific question in that jumble of banalities you just spouted at me – I just fancied a change. The endless infinity of eternity gets a bit boring after a while. The eye needs fresh delights!

Rishi: Very true, Ed. For the benefit of listeners – and while Ed removes his helmet – we’re currently sitting in the Jolly Gardeners, on the corner of Black Prince Road and Tyers Street, on the borders of Vauxhall and Kennington. I believe both places hold happy memories for you, Ed?

Edward: [awkwardly] That’s… right, Rishi. [clunking noise as visor goes down, sound of muffled breathing, then a loud “pop!”] Ah that’s better! You can’t imagine how smelly it gets in there.

Rishi: [laughing] Although I, a member of the fourth estate, am not exactly meant to point that out to you, a prince, in case you take offence and chop off my nose!

Edward: “It” gets smelly, serf Dastidar. Not me.

Edward: I had – rather naively, it turns out – assumed that for the return of such a major royal personage as myself they’d send someone of suitable heft, gravitas – bottom. Some grand inquisitor. Maybe even Brian Walden. Still, I suppose your youth and inexperience make you tremendously biddable. As does your minuscule hourly rate. Even I’d be tempted to call that enslavement. Carry on.

Rishi: So, then, Your Highness, you’ve decided to revisit some places that are special to you. I think many of our listeners would be surprised to find out that this little part of Lambeth is one of them.

Edward: Yes, I wanted to see how my old manor had changed.

Edward: No, my manor, Rishi, my palace – and, no, please don’t do that inverted commas thing. My old palace was at the bottom of this road. I remember reading in some architectural guidebook – no, not that parvenu Pevsner, something by Emery – that I swept away the existing manorial complex in favour of something residential. Utterly untrue. Do I look like the sort of man who’d settle for anything less than a complex?

Edward: The correct answer, Rishi, is “no”. Really, am I a stickler for insisting on such old-fashioned notions as the correct answer? And, yes, before you ask, whatever I say is the correct answer. Anyway, I rather hoped the preservation order I slapped on it would be enforced, but it’s amazing the liberties that get taken if you’re not on site to enforce your writ. That fat twat Henry decided his new Whitehall gaff needed a certain something and didn’t think to check with his more illustrious forebear that it’d be OK to take some material from the old place. And then demolish it. Cheek. Still, you never could trust the Welsh, could you?

Rishi: Can you tell us a bit about what the palace was like, Your Highness?

Edward: Ah, but what a glittering delight it was! Well, it was as glittering as walled mediaeval compounds filled with fowls, fiends, rotting timbers and the flesh of the damned ever can be. And, compared to what I saw on the Continent, my little home was a damnably grand treat.

Rishi: That opinion’s not a terribly fashionable one to express these days. Criticising our European partners…

Edward: What? Am I, who risked life and limb against the French, the Flemish, and various other lowland types – or, as I like to call them, “family” [he chortles at his own joke] – am I being criticised for expressing an opinion about them, an opinion based on sights seen by my own eyes, which are as reliable a witness as any to the horror that is the roiling mass of Angles, Saxons, Gauls, Latins and Greeks? They might pretend to share some behavioural veneer called “civilisation”, but the main thing that lot need to veneer, frankly, is their hellish addiction to endless fornication of the most base and – and let us give them their due here – imaginative varieties. Really, one learns so much on these campaigns.

Rishi: [coughing] So… the palace?

Edward: Ah, yes. You ungrateful serfs appear to have been unable to prevent Heavy Hank’s descendants from turning my home into the world’s most boring office block! In which are promoted, I hear, the mercantile activities of my current successor in the Cornish duchy. A waste, a sheer, monstrous, carbunculous waste – you’d think the jug-eared builder-botherer would have insisted on bringing some more life to it. At least the ne’er-do-wells in the other dens of sin around here have vivacity and vitality shot through to the very marrows of their fetid, addled, rotting cores! My people! [suppresses a sniff] They make me inordinately, joyously proud!

Rishi: [carefully] Isn’t this all a bit strong? “No man can stand in the way of progress” and all that? It might not be to your taste, but – buildings must be built, offices must be… officed… [peters out]

Edward: My military career is certainly proof that no Frenchman can stand in the way of my progress.

Rishi: That’s not quite what…

Edward: And I certainly inspired them to buck up their culinary standards.

Edward: Well, I have it on good authority that the Siege of Calais reduced most of the local brasseries to a price fixe menu of rats, dogs and babies. Imagine shimmying up to a zinc-topped bar, having got your fresh Gauloises from the tabac next door, necking your Campari and soda, and then stretching out into your rat au vin. It’s no surprise that they learnt how to cook properly after that. And the hospitality got better too. I tell you, Rishi, that’s certainly something that could be picked up on here. That said, there are some places I won’t be seen dead in. Or alive. Take that one over yonder that some nark has had the nerve to name after me…

Rishi: … for our listeners, that’s the Black Prince pub, which is a bit further down the road from where we are…

Edward: … they’ve thieved my name to stick on the door of some spittle-flecked, nicotine-stained, flea-ridden dump of a hovel, rank with the stink of submerged dog and flatulent ploughman, patronised by track-suited single mothers bottle-feeding their spawn draught Fosters while being eyed up by tattooed mongrels too unfit even to roll down sideways to the spongers’ office without first clambering into a stolen wheelbarrow, and –

Rishi: You’ve not actually been in there, have you?

Rishi: But – you’re a warlord! You – and I apologise here to listeners of a sensitive disposition – invented getting mediaeval on people’s asses!

Edward: Yes. I am. And I did. But I’m a bit rusty. I don’t want to put it about a bit just yet. Oh, I almost forgot – I pioneered menticide too.

Rishi: Did you? [pauses] What’s that?

Edward: The systematic undermining of a person’s beliefs, attitudes and values. So maybe I’ll try to dehort them from some of their selcouth behaviour. Maybe after a game of darts.

Rishi: Dehort… selcouth… [pauses]… overall, how have you found your trip back?

Edward: As a soldier, I cannot be stenotopic –

Edward: Oh, good grief! Do you know anything? It means able to adapt to only a small range of environmental conditions. And, considering where I fought, you will agree that I was not. Anyway, the point I am trying to make is that I have found my trip back neither good nor bad, neither pleasing nor indifferent, neither merciless nor insightful. It has just been, if that isn’t too much of a zen-like concept for you to handle. But one thing has made me angry. That mosaic of me under the railway bridge – who put that calamity up? I know I’ve got lines, but I don’t look like crazy paving.

Rishi: I’ve no idea, but maybe one of our listeners can e-mail or text in? You know the number. In the meantime, Ed, what will you be doing next?

Edward: Well, in the immediate short term, I think dealing with your inanities has justified a stein of whatever frothing Bavarian nonsense they serve in here.

Edward: Well, I’m spending Christmas at Eltham where, as in the good old days, I’ll be killing my own dinner and leaving some orts for the local populace. Though looking at the size of the good burghers of south-east London, those little scraps might not be of much interest to them. And then… I’m not sure. Maybe I’ll put some plays on. I’ve always fancied the hoofing industry. I might not be as lithe as I was, but that doesn’t mean I don’t still have an eye for those that are.

Rishi: That sounds like an eminently achievable ambition, Your Highness. Thank you for your time…

Edward: [muttering]… and my patience in not decapitating you…

Rishi: … and with that exclusive, Gary, it’s back to you in the studio.

Thanks very much for that, Rishi. And now it’s over to Jools with the travel… 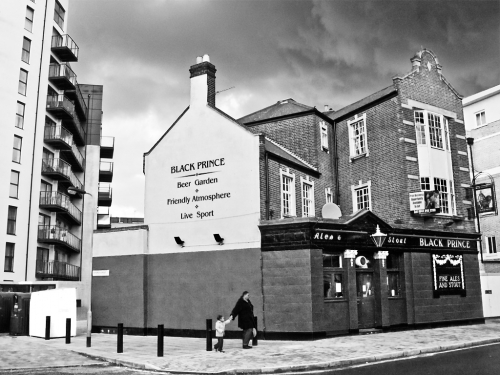 [This piece originally appeared in Smoke 15.]

JACOBVS SECVNDVS, aka James II, Trafalgar Square by Matt Haynes
Don’t be fooled by the Roman garb. This effete nob with his toga tossed casually over his shoulder – part Brideshead, part Duran Duran circa Planet Earth – and his tunic hoicked over his knee like a Year 11 schoolgirl at a bus stop in Watford is, in fact, King James II, his body languidly bowed like a small fey banana and his upper limbs polygonically disposed as if to remind us that, truly, this was the noblest teapot of them all. [read more...]

Please Do Not Climb On The Horse

A fantastic new series in which we attempt to catalogue some of the amazing things you can't do in our fabulous capital city. Today: climbing on the horse in Spring Gardens. [see more...]