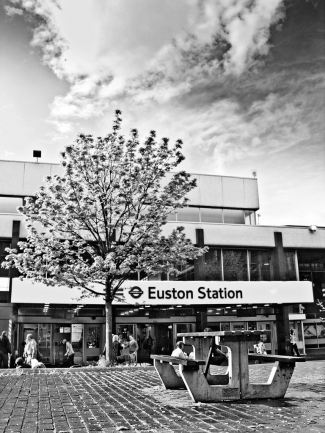 Oliver Hughes arrived at Euston station on the 08:37. Briefcase in hand, he scurried across the station concourse. The conference was due to start in twenty minutes and, although it was only a short walk up North Gower Street, he was keen to arrive punctually. Mr Hughes wondered, even more keenly than usual, how many others in the well-dressed corporate pack clasping briefcases and bags or speaking urgently on mobile phones were, like him, halfway through mortgages and had functional marriages and children to support. Here they all were, escaping the station into the slow drizzle of London for another day of deals, meetings, deadlines and networking.

Mr Hughes read the agenda half-heartedly. The day was dedicated to the stabilising of company profits during a recession. He noted the times for breaks and found an inconspicuous seat.

The first speaker was a professorial middle-aged man with a rounded paunch. He read slavishly off his PowerPoint notes as if his corporate life depended on it. Something about seeking new markets and the need to replace existing models of management in the current economic climate. How much of himself, Mr Hughes wondered, did the speaker really invest in corporate life? To what extent did the maintenance of corporate profits define who he was?

Tiny beads of sweat began to pump out of the speaker’s forehead and, up on the screen, his hunched silhouette looked vulnerable. The poor fellow just wants to eat, drink, sleep and laugh, Mr Hughes thought, but ends up doing this to keep it all going. What does he do in his spare time? Maybe he enjoys sitting in a cosy bird hide with an old tartan flask, corned beef sandwiches and binoculars. Wide open spaces, fresh air and birdsong. Or maybe he has a train set in his loft that he’s been adding to for years, with little porters, stationmasters, signal boxes, bridges, trees and ever-expanding towns. Then, Mr Hughes noticed that the speaker was wearing a belt with the Harley-Davidson logo prominent on the buckle. Harley-Davidson! Outlaw motorcycle gangs and the freedom of the highway. Surely this man, with his monochrome suit and voice, could not possibly ride a Harley?

Mr Hughes looked discreetly around. A woman with long mousy hair and a faint bohemian style had a Celtic tattoo just visible beneath the wavy arm of her paisley blouse. Elsewhere, he noticed a small CND sticker on a briefcase.

A crescendo of clapping shifted Mr Hughes’s attention. More PowerPoint appeared, this time with sound, colour and zooming-in, and a new speaker was introduced, a smartly dressed young woman with shiny dark hair and a classic trouser suit. She positively sparkled. She alternated the pitch of her voice and emphasised certain words. Her hand movements and facial expressions captured meaning effortlessly. Humour was employed with short gaps after the punchline for appreciation. Eye contact was made. This, Mr Hughes realised, was a highly impressive performance. Her topic was staff motivation.

She added a joke to her closing comments, and paused. This time, however, no one seemed to realise they were supposed to laugh. The speaker moved from foot to foot and mumbled something inaudible before quickly moving on to the final slide.

Mr Hughes considered the blip. It had clearly unnerved her, revealing the panic underneath. Had she dreaded the performance, despite the poised conviction of its delivery? Was there once a time, maybe in a school play long ago, when she had fluffed her lines and been admonished?

The last speaker before coffee break had now started. Mr Hughes checked his watch discreetly. It was a child’s watch that had once belonged to his son, Adam, when he was seven. Mr Hughes had found it at the bottom of an old toy box in the attic a year or so ago. It was over ten years since it had been in use but Mr Hughes had replaced the battery and found it still worked. The watch face was a beaming Mickey Mouse whose thin arms and big pointing fingers told the time. It was the first watch he had bought for Adam, who’d worn it to school and in bed and would often be seen gazing at it on his wrist. This was well before the closed bedroom door, the thrash heavy metal, Facebook, and the stunted communication of the teenage years.

Mr Hughes was seven when his parents got divorced. Afterwards, he and his brother and sister were brought up by his mother. He was the oldest, and helped around the house and looked after his siblings. It wasn’t the worst childhood, but he always had some responsibility and there was very little money. As a father, he had bought both his own children many toys, games and films. He had given them what he felt he had never had. He had sacrificed his childhood but made sure his own children lived the dream and maybe, he thought, he now wore the watch as some kind of reminder of his selfless service. But he’d had plenty of toys as a child and, though times had been tough, there had been plenty of lightness.

Mr Hughes decided that he wore the watch because he thought of himself as quirky. He liked to check the time when he knew others would notice. He didn’t need an expensive timepiece to confirm his worth. Most of his adult life had been spent distancing himself from others. They were all salary slaves, they were the nuts and bolts of a dreary, never-ending false consciousness. They had been taken in by money, advertisements that manufactured new desires, they had sold themselves out to ‘the system’, and they perpetuated it. He wore the watch to remind himself and others that he hadn’t quite been crushed, that he retained a distinct identity.

But then he looked back to his university days. All those dreams of transforming the world, anti-nuclear marches, the smoky gatherings of hairy utopian socialists. Now he had been reduced to wearing an iconic symbol of a vast entertainment corporation on his wrist to represent his sense of distance from the status quo. Quirky Mr Hughes. The ex-radical with a gold American Express card.

It was coffee break. Mr Hughes decided to have a chat with the paisley-wearing woman with the Celtic tattoo. He asked her what the tattoo meant to her. She said that it meant nothing, and that was why she’d had it done. The constant search for meaning in external reality, she said, was leading to a vacuum in our inner lives. She handed Mr Hughes a card and told him she was starting up meditation and mindfulness classes as a sideline. It would help people to reconnect with their inner selves and provide a useful extra income to help meet her daughter’s university costs.

Mr Hughes had recently been to a similar class as he’d thought it would help him control his furies. During one session, the group had been asked to silently contemplate the slow trickle of a dewdrop down the surface of a lotus leaf for half an hour. Afterwards, the kindly Buddhist monk had expressed the hope that the class had been able to focus their “butterfly” minds. Mr Hughes had recently received a speeding ticket and he had focused on murdering the policeman who’d pulled him over and anyone who looked like him. The only idea he’d been able to relate to was the slowness of it. He had committed his murders very slowly.

Mr Hughes rang his boss and told him he had a migraine and would like to go home. His boss was understanding but concerned, as Mr Hughes had had a number of migraines lately. As he wandered through the drizzle into Euston station, Mr Hughes was met by an army of suits heading for the exit from a recently arrived train.
About the author

With the aid of a small folding table, why not set up a stall on Westminster Bridge selling wire sculptures of John Prescott to Japanese tourists?

by Matt Haynes
One afternoon in September, a bright-eyed young publisher walked into a small independent bookshop in South London with a large cardboard box containing copies of a shiny new book, and asked the manager if he’d like some. Sale or return, no money upfront, no risk. [read more...]

by Jacqueline Downs
It was the summer of 1976 when we set fire to David McIntyre. Round the back of Brockwell Lido, bushes hiding us from the expanse of the park. Every now and then it comes back to me. [read more...]