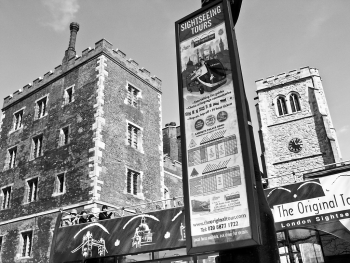 I’m crossing the road near Liverpool Street. My senses feel oddly heightened, though I’m not sure why. And, even so, I nearly miss it. Or, to put it another way, it nearly hits me. So practised am I at spotting the shape of my habitual single decker that when the open-top number 11 comes, I blank it out.

Nothing. I blank it.

But it keeps coming, and I’m still in the middle of the road.

My mouth can only hang open by way of salute, but the left hemisphere of my brain is quick enough to judge. A tourist bus? In the City? At 8.30 a.m.? Left brain does a double take. It notes that the big red shape is somewhat larger on my retina than a second ago. Surmises that it might be getting nearer, and it would be wise for me to step out of the way. Left brain gets me off the road and onto the pavement. Right brain is just confused. It wonders if this is some kind of omen. I am in two minds.

So my legs do my thinking – and my lungs the second thoughts, fifty fast yards later. I find myself getting on the open-top bus. Completely the wrong direction, of course. All the same, I bound up the stairs to the top deck to properly survey my city. I sit as near to the front as I can, behind a woman with shiny, almost iridescent long hair, only just settling down herself. She seems very nearly as flustered as me.

A gorgeous day, suddenly ever so slightly warm. It had looked so cloudy the moment before. Without a roof above, I feel wonderfully shorn. I am a sheep liberated from its winter coat. Brilliant light reflects from the handrail. The bus shudders into motion.

Right brain, in its enthusiasm, has left brain pulling my phone out of my right pocket with my left hand. This achieved – with some difficulty – I phone Jon.

There’s no reaction from Jon. I struggle to hide my annoyance.

“Normally,” I say, “ – and I don’t know if you’ve ever noticed this – regular bus services tend not to have an open top. It’s a magic number 11 bus, Jon! There’s never been an open-top number 11 before!”

“It’s not a magic bus. It’s not on a magical mystery tour, either. It’s just the wrong fucking bus. Now shouldn’t you be getting to work?” he says. “Like I am?”

It’s a little unsporting, bringing up the work thing, at a time like this. Does he know of nothing else? What of the beautiful day? What of the joy of exploration? He understands nothing. Admittedly, the magic number 11 takes me a little out of my way… in fact, in the opposite direction. I had wanted to get to Barbican, or I thought I had. But what of it?

At Bank, the beast makes a heavy feint towards Cheapside, then seems to decide otherwise, turning its great flank against it as it heaves itself instead down Queen Victoria Street. It’s heading for Trafalgar Square. I just know it. The open-top number 11 obviously has tourism in its blood.

He huffs in contentment, justified once more.

Peace restored, we bid each other adieu. I continue my journey unabated. To be perfectly objective, the view on either side is not among the most princely. A former tourist bus might hope for more. But it’s round about now that I start to notice my fellow passengers. They don’t notice me back. I assume they must be tourists, as their heads are turning to and fro, whipping left, right, left, right, as if the bus were on a suicide mission through Centre Court. I can’t help noticing – well, because it’s obvious – that they’re dressed for a day in the office, like me. They’re like no tourists I’ve ever seen.

The shiny-haired woman seems to have a book in her lap, but she’s not reading it. She’s stealing shy glances around her. I understand – she’s pretending to be on her way to work, faking the blinkers over her eyes. She’s afraid someone will find out that she’s meant to be on the 25 to Employmentville. Nuts, but I know how it feels.

It’s strange being on a tourist bus without a guide. Or, for that matter, on a commuter bus with a penchant for the scenic. It forces me to see the city through its eyes. It has a good long stare at Trafalgar square – half circles it, like a great cat – then decides not to linger. It grumbles its way through Sloaney territory instead. I wonder what it is thinking.

Eventually, after another pleasant half hour or so, the bus stops. We wait, wondering what the hold up is. Slowly, it dawns on one or two of the brighter individuals that this is the last stop. We are meant to get off – the number 11 terminates at Fulham Broadway.

Each of us gathers our possessions and rises slowly, with faked weariness. I try to catch someone’s eye – for some mutual acknowledgement that we are not true 11’ers. No one returns my glance. They are putting on glassy-eyed stares. Londoners.

As I squeeze down the stairs, there’s a tap on my shoulder. The shiny shy woman. I open my mouth to apologise for pushing in front of her.
It’s amazing how soon I’ve turned back into a pushy commuter.

[This piece originally appeared in Smoke 16.]

30 St Mary Axe: Above and Below

by Joan Byrne
In a basement flat off the Finchley Road, a Siamese cat, an Alsatian dog and a rat called Horatio lived with their owners, Jason and Arabella, known as Bella. Jason was a small-time dealer and Bella used to be an aristocrat, at least that’s what I heard. About the only thing they appeared to have in common was that both were short. To compensate, he wore special hand-made boots with Cuban heels, which gave him an extra two and a half inches. [read more...]

... a spokesman for Lewisham council today admitted that the so-called “blindingly obvious” solution for dealing with SE6's massive rat infestation might have been based on misinformation and syntactical confusion [see more...]