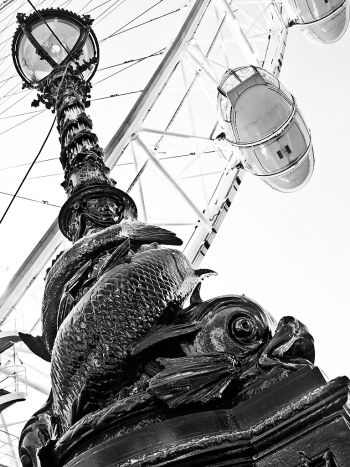 We boarded the train for Euston, you and your dad and me. We played I Spy and you giggled when I said fart. We disembarked and made our way to the Eye. Both wearing red, we bundled up brightly against the grey sky, cheeks the colour of our jackets. Your dad opened his backpack and we ate the snack bars your mum had packed for us. I’m sure they were intended for later in the day but it was cold and we were on holiday and we didn’t care. The bubble was warm and your dad and I raised our eyebrows at the overprotective parents who wouldn’t let their children go near the edge. Your dad and I decided that the parents were called Olly and Fi.

You and your dad had a ride on a merry-go-round and I held your jackets. You drank hot chocolate under a bridge and laughed at my photo of your spectacular milky-brown moustache. We walked to the Natural History Museum, your little legs moving quickly to keep up the pace. I was surprised that you were afraid of the T. Rex but we didn’t make a fuss about it. We had an illegal picnic in the museum, praising your mum again for her foresight and great sandwiches. You took some funny photos of me being attacked by dinosaur hand puppets in the souvenir store. You didn’t complain when I said I couldn’t buy you anything.

I dropped my glove on the pavement outside the museum. A man walking behind us picked it up, tapped me on the shoulder, handed it to me.

You quietly slipped your warm little hand in mine as we passed the ice rink and admired the lights. On Regent Street, you and your dad walked on while I stopped to take a photo of the Christmas lights. You noticed I was missing, looked around anxiously, tugged on your dad’s sleeve, told him to slow down, wait for me to catch up. When I did, you smiled and took my hand again as if it were the most natural thing in the world.

I thought my heart was going to break.

[This piece originally appeared in Smoke 16.]

Removing his coat, he breaks through the buses and levers himself over the railing that divides Upper Street. Dismounting, he smiles at me drunkenly, then jigs into Angel’s welcoming mouth.

Anatomy of London No. 13