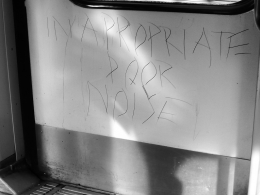 Someone is fighting a lonely war against noise on the Central Line. The shrill tone that announces that the doors are closing is too loud for them, or too high-pitched, or both. They scratch their complaint into the doors: Excessive Door Noise; Noisy Doors Cause Deafness; Too Loud. Always the same hand, the same terse concision. How long has this been going on – scratch-scratch-scratch attrition on one side, deafening psy-ops on the other?

Meanwhile, almost unnoticed, part of the Central Line has lost its voice. Perhaps the anonymous vigilante of quietude is pleased, but it’s really a cause for sadness: The Leyton Roar is gone.

At the Central Line’s easternmost reaches, between Epping and Debden, trains roll through actual countryside – fields, cows, hedgerows. Further west, towards London, the city begins to compose itself out of fragments. Scattered semis link arms into terraces, playing fields shrink and evaporate, urban pressure closes in. At Leyton, the gathering density pushes the line underground.

As if to make it clear that Leyton is a threshold, there is an enormous, crowded Catholic cemetery next to the station. Graveyards are traditionally placed at a city’s edge, for hygienic reasons and to satisfy their demands for space. The approach to the tunnel mouth has none of the flamboyance of the cemetery, but there is a grave quality to it: the long downward slope is like the ramp leading into the tomb of an ancient civilisation. This sense of the monumental is reinforced by the rising filthy retaining walls, bruised pink like the walls of the Forbidden City in Beijing or Delhi’s Red Fort, or the exhausted moquette of older Central Line seats. The portal itself is modest, stained with decades of abyssal grime.

This eastern entrance to the city used to be far more impressive, though, for it had an aural architecture too: The Leyton Roar. When a westbound train entered the tunnel, a powerful wave of air would blast through the carriage with a high-volume shriek, loud enough to silence any conversation and surprise the unsuspecting: people would be cut off mid-sentence, or roused from their newspapers. Even for city ears accustomed to tuning out announcements and the Tube’s general background thunder, this noise was impossible to miss. It was a signal, a portent, an apocalyptic howl that far exceeded the usual Underground cacophony. Like an triumphal arch or a gate, it announced that the train had entered the city. And now this landmark is gone. Now, there is simply a dull whoosh when the train slips into the tunnel. No one looks up, and conversations continue.

The sudden disappearance of The Roar unnerved me. Why had it gone? The trains were the same, the tunnel was the same – how could the sound of the journey change so dramatically? These changes are important. If such a noise made a sudden appearance in a routine journey, it would give pause for thought; its disappearance might be more subtle, but is no less significant.

I e-mailed the Transport for London press office. A month passed without reply. I e-mailed again. This time, there was a response, from Benedict Pennington, head of the London Underground press desk. “I believe the difference you will have noticed will be as a result of track and ballast replacement,” he wrote. “This involves removing all the rails and aggregate which the rails sit on, and replacing them with continuously welded rails, rather than blocks of jointed rails. This would alter the ride noise on board our trains.”

That wasn’t wholly satisfactory. The Roar hadn’t seemed to be a product of the ride noise of the trains. But if removing the aggregate meant there was now more space, then maybe the train would be less like a piston smashing against a wall of pressured air as it entered the tunnel, resulting in a quieter passage – maybe? “Track and ballast replacement” – it was shaped like an explanation, and filled the hole where an explanation should be, but didn’t really explain anything.

Once a day I still listen out for The Leyton Roar, and listening for a sound that isn’t there breeds a kind of supersensitivity – it’s as if there is now a negative space where The Roar once was, a new space of quiet carved out of the Tube thunder, in which creaks and sighs that would otherwise rush past unnoticed suddenly stick out; and that thickening in the ears, that perceptible increase of air pressure against internal membranes, that movement of blood in the darkness – a new roar.

Meanwhile, the scratch marks still appear on the doors: Noise Pollution; Inappropriate Door Noise. Somewhere out there, the Noise Vigilante is still at work.

[This piece originally appeared in Smoke 16. Photos are by Will Wiles.]

by Jude Rogers
I feel snug in the back, so I ask him his name. “Reg. Pleased to meet you. And you?” I tell him and we talk about that song by the Beatles. We share details for a while, give each other pocket-sized versions of our life stories: his family in Wales, how long I’ve been in the city. Then I ask him how long he’s been out here. How long he’s had the badge. How long it’s been since he had his blue book. [read more...]

Number One in the acclaimed series
"Things On The Isle Of Dogs Which Are Actually A Bit Disturbing When You Stop And Think About Them"
[see more...]

by Phil Callaghan
Posted at the foot
of the escalators
he whistles
I’ll never fall in love again...
[read more...]