Your mother tells me that you are working for Kingsnorth Insurance Ltd, at offices on Cheapside in London. As a young girl I worked for the same company on the same road, although at different premises.

You are probably familiar with Postman’s Park since it is practically on your doorstep. If not, then it lies a short walk north of St Paul’s Cathedral where it functions as conduit between St Martin Le Grand and King Edward Street. I recommend that you pay it a visit if you have not done so already. The area is now a landscaped garden and is popular with office workers on their lunch breaks. It is a very pleasant place to sit and ponder the world, particularly when the sun is out.

Formerly the park was the graveyard of St Botolph’s, Aldersgate. It also incorporates the burial grounds of other neighbouring churches whose names I do not care to look up. Some of the old gravestones have been rescued and are lined up against the walls of the adjacent buildings in rows that are three or four deep, with the tallest at the back, as if they are posing for a group photograph.

At the centre of the park there is an open wooden shelter with a sloping roof, whose rear wall houses George Frederic Watts’ Memorial to Heroic Self Sacrifice. This was established in 1900. It comprises individual memorials to ordinary people who selflessly gave their lives in order to save the lives of others. Each tribute is made from glazed ceramic tiles. Usually these are arranged in a four-by-three grid, sometimes with a thin border on either side. Painted onto each set of tiles is the name of the person who is being commemorated, along with a brief account of the circumstances of their death.

After Watts passed away in 1904, his wife, Mary, continued to add new names to the memorial which has grown at a slow rate ever since. Even now new tiles continue to be added to it, albeit intermittently.

Before your great-grandfather made the wise decision to marry my mother he was engaged to a woman called Beryl Chudley who was employed as a secretary by Mr and Mrs Watts. Her duties at one time included ordering the memorials from the tiling company which was based in Stoke-on-Trent.

In her diaries, which came into the possession of my father following her death and lie open in front of me as I write this, she notes that a small number of the tiles went missing in transit and were presumed lost in the post. Between 1901 and 1908, a total of nine were mislaid in this manner. Since these were one-offs they were never replaced.

Unbeknownst to George and Mary Watts the name of the building where they kept offices (The Rosehills) was shared by a residential property a few streets away. Occasionally an error would be made at the sorting office, resulting in the tiles being delivered to the wrong address where they came into the possession of a music teacher called Marjorie Phipps.

Noting the Staffordshire postmark on these deliveries, Phipps assumed they were gifts from an aunt who resided in the county and was a keen amateur potter. Eventually she incorporated them into the tiling in her bathroom where they remained for many years.

This only came to light last year, in 1997, when builders who had been tasked with renovating the property demolished a false wall dating to back to the early 1980s (when the residence had been owned by a famous pop star) and discovered the original tiling still intact.

One of the workmen was familiar with Postman’s Park and called the Museum of London who confirmed the authenticity of the memorials.

They have since been removed and, in time, may be transplanted to their intended destination, many decades later than planned. I enclose some photographs that my friend Mary took of the lost memorials when they were briefly on display at the museum.

I expect that I will see you at Christmas 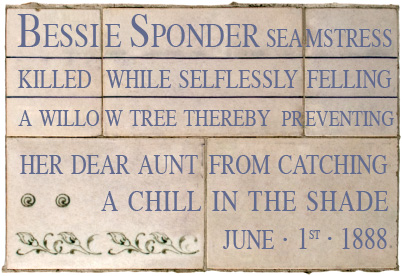 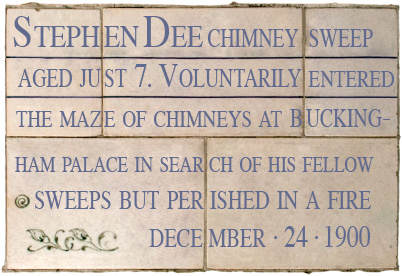 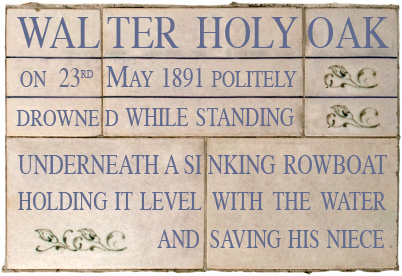 Images by Matt Haynes from text by Mark Sadler

A History of Fennel in Wimbledon

by Mark Sadler
If Father Hendlam were alive today he would grab Martin Young vigorously by the shoulders and shake him from his stupor, not in anger, but in a kind of evangelical fervour. He would drag him before a mural in the nave at St Mary’s that depicts a cross-section of a London fennel bulb, and point out a small section in the labyrinth named “the alleyway of lust”. “Do you SEE that, boy?” he would bellow. “There’s where you are." [read more...]

by Tom Elkins
In Paris, I saw the word EVERYWHERE spray-painted across the city. Around King's Cross and Euston I've seen a shield or a face, sometimes with the word SIN written underneath. When I see thick rectangles of paint on the sides of buildings, I wonder what's hidden underneath, what's been covered up... [see more...]

Bored at the British Library